The American Law Institute CLE’s recent Accountants’ Liability Conference featured a panel discussion on substantive defense strategies in SEC and PCAOB proceedings starring representatives from both sides of the table. The panelists went over a number of recent enforcement proceedings brought by the SEC and PCAOB and offered tips about engaging with the agencies, including how to cooperate with enforcement to substantially reduce possible sanctions. 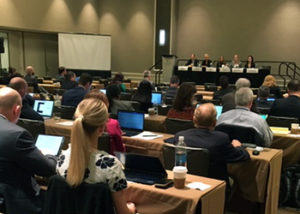 Trends. Scott B. Schreiber of Arnold & Porter kicked off the discussion with a rundown of trends and the types of enforcement proceedings the SEC and PCAOB are pursuing. In the past year, there is still a focus on auditor independence as well as on compliance with engagement quality reviews under AS 7. There has been an increased number of cases brought based on the failure to respond or to cooperate fully with investigations and a surprising number of cases relating to the inappropriate alteration of audit documentation,  Schreiber said.

Schreiber pointed to the PCAOB’s action against Grant Thornton as an example to contemplate whether the PCAOB will decide to take action against firms as opposed to individuals. In that proceeding, the Board found that Grant Thornton’s Philadelphia office violated quality control standards in connection with its assignment, support, and monitoring of two engagement partners. Grant Thornton settled the matter for $1.5 million and agreed to take “tremendous remedial actions” at the Philadelphia office.

Also notable, according to Schreiber, was the PCAOB’s action against Melissa Koeppel, due to the length of the proceeding. This action concerned audits from 2006, 2007, and 2008. The PCAOB instituted proceedings in 2011, and a hearing was held in 2012. There was finally a decision December 2017. Schreiber said that the PCAOB is making an effort to move these kinds of proceedings along more quickly.

Schreiber also discussed the SEC’s recent administrative proceeding against three individuals working on an audit at BDO. The senior manager on the audit, feeling pressure to finish the job, directed the audit team to “predate” audit documentation. The engagement partner and the engagement quality review partner signed off on the audit. The three individuals were suspended from practicing before the SEC as accountants, but BDO
itself was not penalized, which is an example of where enforcement staff will pursue individuals, but not the firm, Schreiber noted.

SEC enforcement. Senior Associate Chief Accountant in the SEC’s Office of the Chief Accountant (OCA) Ryan Wolfe outlined a number of cases and administrative proceedings the Commission has brought against accountants and auditors in the recently-ended fiscal year. The SEC has continued to pursue actions against issuers and preparers for violations of accounting standards, he advised. Wolfe also drew attention to SEC v. ITT Educational Services, where the CEO and CFO agreed to pay civil penalties for concealing the poor performance and looming financial impact of two student loan programs that ITT financially guaranteed.

The SEC has also brought charges against network firms that played a substantial role in issuer audits without registering with the PCAOB, Wolfe advised. He noted that the SEC also brought charges against the principal auditors that were relying on the work of the unregistered firm. The message is that it is critical for the principal auditor to understand that they are relying on these firms to assist in their engagements, he observed.

Wolfe also highlighted the SEC’s efforts to enforce orders against accountants, citing as an example the Medifirst case in which an auditor had been suspended by the PCAOB, barring him from working in an accountancy or financial management capacity. Despite this, the company and its founder allowed the auditor to do so, including preparing the company’s draft financial statements. The founder agreed to pay a $22,500 civil penalty to settle the charges. However, Wolfe advised that the current Commission does believe in rehabilitation and outlined the steps for reinstatement after a suspension. He did warn, however, that the SEC will take all correspondence into account in evaluating a request for reinstatement, which a party seeking reinstatement should consider when they feel like discussing how unfair the Commission was in its proceedings.

PCAOB enforcement. William Ryan, PCAOB Deputy Director of Enforcement, gave the view from his Division. Ryan outlined five ways in which the Board is seeking to improve the efficiency of the investigative process. First, Enforcement staff is inviting firms to participate earlier in the investigation than in the past. Ryan advised that when the investigation involves serious misconduct, firms should be “open and fulsome” in their cooperation with the staff to receive credit for that cooperation.

As an example, he cited PCAOB proceedings brought against Deloitte Turkey, which were settled in December 2017. In that proceeding, senior partners at Deloitte Turkey devised an elaborate plan to improperly alter audit documentation relating to engagements that had been selected for PCAOB review. Ryan noted that, while the Deloitte Turkey case involved significant misconduct, the firm had provided extraordinary cooperation with PCAOB staff in its investigation, including voluntarily self-reporting the misconduct, implementing enhancements to its internal control policies, and providing substantial assistance to the PCAOB investigation. As a result, the Board imposed a $750,000 civil penalty on the firm, which would have been substantially larger absent cooperation with the PCAOB staff, Ryan explained.

Second, the PCAOB has made changes to its testimony-taking process. Traditionally, the staff would start taking testimony from junior employees and work its way up, but in some cases the staff is now starting with more senior members of the firm, Ryan said. While this is not always the most efficient way to take testimony, it can help the staff scope the testimony better, according to Ryan. Third, the staff is taking a step back and asking itself at the outset of an investigation what kind of evidence it has and what kind of evidence it needs to proceed, including the kind of resources required for the investigation.

Fourth, Ryan said that the staff is trying to expedite investigations by sending out written interrogatories in advance, such as requesting work papers that were relied on so the parties are not flipping through them during the interview itself. Finally, Ryan said that since the staff is doing everything they can to expedite testimony, they appreciate similar cooperation from the firms, individuals, and counsel. For example, don’t send documentation to the staff the day before testimony is given, Ryan advised.

The firm perspective. David L. Sorgen, Associate General Counsel in Deloitte’s New York’s office, recounted recurring themes from the perspective of accounting firms. He noted that both the SEC and the PCAOB have experienced changes over the past year, including new commissioners at the SEC and a brand-new Board with new senior staff at the PCAOB. The SEC has refocused its enforcement approach to concentrate on Main Street investors. It has also taken a more centralized approach, he said, noting recent 2017 policy of requiring the approval of one of the co-directors of the Enforcement Division to issue formal orders of investigation and subpoenas.

Sorgen also gave some practice pointers from the view of the defense counsel. He emphasized the importance of early case assessment. He also recommended that firms engage in voluntary reporting, conduct internal investigations and report the result of the investigation to regulators, implement enhancements to internal controls and procedures, and take action against personnel responsible for the misconduct.

© 2018 CCH Incorporated. All rights reserved. The foregoing article is reprinted with permission. This article was published in Wolters Kluwer Securities Regulation Daily Wrap Up, on October 23, 2018. For more information about subscribing to this publication, please visit www.dailyreportingsuite.com