﻿The Impact of Tax Reform on Umbrella Partnership Structures (UP-Cs)

Over the past 15 years, umbrella partnership structures (commonly referred to as “Up-Cs”), in which a newly-formed publicly traded C corporation (“PubCo”) acquires interests in an existing business operated in flow-through form (generally, a limited partnership or limited liability company treated as a partnership for U.S. federal income tax purposes) (the “Partnership”), have become the dominant structure through which Partnerships have raised equity capital through the public markets. It is easy to understand why: an Up-C structure allows the Partnership to raise money (and its historic owners (the “Partners”) to sell equity) through a public offering while allowing its Partners to retain flow-through economics (including a single level of tax and pass-through of tax losses) until the Partners are ready to sell. At the time of sale, the Partners have access to liquidity through the right (negotiated at the time of the IPO) to exchange their Partnership interests for PubCo stock (usually on a one-for-one basis), which stock can be sold on the open market. As a bonus, in connection with Partner liquidity, PubCo receives a step-up in its allocable portion of the basis of the Partnership’s assets as a result of such an exchange, which can be used to offset future income at PubCo. In nearly all Up-Cs, the Partners negotiate for the right to receive a portion of these benefits as and when used by PubCo (or upon certain exit events) through a Tax Receivables Agreement (“TRA”). Because of these benefits, practitioners generally believed that Up-Cs would become the dominant IPO structure for any pass-through business.

Tax reform perhaps changes the calculus, both with respect to existing Up-C structures and for Partnerships that are considering raising capital from the public markets. In December 2017, President Trump signed into law a tax reform bill commonly referred to as the Tax Cuts and Jobs Act (the “Act”). The Act included a number of significant changes to the U.S. federal income tax system, including meaningful changes to the calculation of an individual’s income tax liability and applicable income tax rates. For example, the Act reduced the corporate federal income tax rate from 35 percent to 21 percent, without a commensurate reduction in the individual federal income tax rate (which was only reduced from a top rate of 39.6 percent to 37 percent). Additionally, the Act reduced or eliminated several tax deductions previously available to individuals who itemize deductions, including the deduction for state and local income taxes. In certain high tax states (e.g., New York and California), this has meant that individual taxpayers are subject to income tax at effective rates of over 50 percent on marginal ordinary income, while corporations are subject to effective income tax rates on average of 24 to 26 percent.

As discussed further below, these and other changes meaningfully affect the value of both current and future Up-C structures. While the benefits of an Up-C structure are generally preserved under the Act, whether an Up-C structure, or certain market terms related thereto, is ideal going forward will depend on the taxpayers’ specific facts. We have summarized some of these considerations (including the Act’s effect on existing Up-C structures) below.8 Section II provides a brief background of Up-C structures. Section III discusses certain provisions of the Act relevant to Up-Cs in general. Section IV describes how these provisions of the Act create opportunities and challenges for businesses operating, or considering whether to operate, as Up-Cs, such as considerations for choosing an IPO structure and retaining a TRA.

There is a great deal of existing literature that provides a thorough description of the historical development of, and technical issues that arise in connection with, Up-C structures.9 To avoid duplicating this discussion and analysis, this section is limited to a general overview of Up-C structures, focused on the typical mechanics and terms. We encourage you to consult these other materials for detailed discussions of these and other structural issues.

In Part A, we discuss how the Up-C structure is formed. In Part B, we discuss the mechanics for, and consequences of, a Partner’s exchange of Partnership interests for PubCo stock. In Part C, we explain common terms of existing Up-C TRAs, including the payment of benefits related to the exchanges described in Part B.

An Up-C structure is typically established through the following steps:

The resulting structure is as follows: 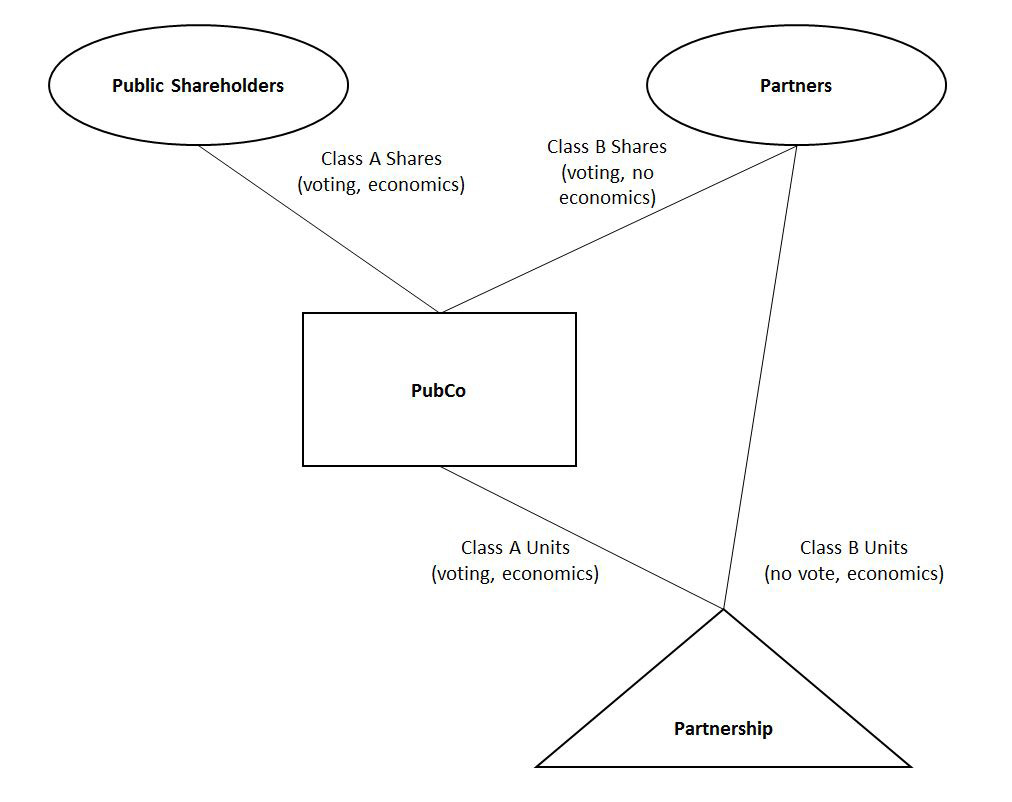 The full article is available for a free download by clicking here and was originally published in ALI CLE’s The Practical Tax Lawyer.

Subscribe to the print or digital version of The Practical Tax Lawyer today.

DEAN S. SHULMAN, P.C. is a tax partner in the New York office of Kirkland & Ellis LLP. He represents clients on a wide range of U.S. and international tax matters, including mergers, acquisitions, divestitures, tax-free spin-offs, leveraged buyouts, initial public offerings and the formation of funds. Dean has extensive experience advising on and structuring transactions, including partnership workouts and restructurings, and like-kind exchanges, as well as transactions involving the formation and operation of partnerships, limited liability companies, joint ventures, funds and real estate investment trusts.

SARA B. ZABLOTNEY, P.C. is a tax partner in the New York office of Kirkland & Ellis LLP. She has a broad-based practice, and handles all manner of complex transactions, focusing on the tax aspects of mergers, acquisitions, divestitures, joint ventures, and spin-offs, both domestic and cross-border. She also advises clients on the tax aspects of securities issuances, bankruptcy and restructuring, and investment fund formation. Sara was recognized by Chambers USA for Tax (New York) from 2017–2018, as a Law360 MVP for Tax in 2017, as a “Rising Star” by Law360 for Tax Law in 2014, and is recommended by The Legal 500 U.S.

MARGARET R.T. DEWAR is an associate in the tax group in the Chicago office of Kirkland & Ellis LLP. Her practice focuses on the federal income tax consequences of complex business transactions.